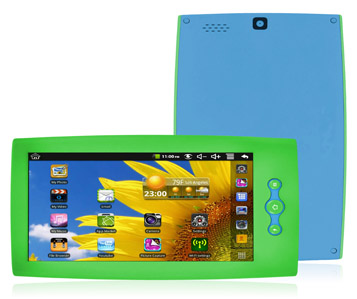 eMatic’s eGlide line is a series of budget tablets perfect for kids. The eGlide FunTab features a secure, rubber outer layer for good grip, and comes in blue, red, green, or pink. It’s worth noting that these aren’t stripped down machines with limited functionality – the eGlide line is made up of legitimate, Android-powered devices that should more than suffice for the kids in the family – and maybe even the adults.

Each tablet has only 4 GB of built in memory, but does have a microSD card slot, good for up to 32 GB. It has built-in Wi-Fi functionality, and is a 3G device. Each tablet runs on a 1 GHz dual-core processor, except for the PRO version, which features a 1.2 GHz ARM-Cortex A9 processor. The display is capable of playing video in 720p HD, and the device features a mic, camera (with video recording), and speakers. Web browsing is a go, and the tablets have access to the Appoke App Store, which features some Android apps. The PRO also has an HDMI port, which the other two models, the FunTab and XL2, lack. 3D gaming capability is also limited to the PRO.