Honestly I wish I was a kid again. Certainly the toys of my youth were alot of fun but as years go by and toys get more advanced, Tickle Me Elmo and Masters of the Universe figures seem so passé. Well this years list of toys certainly trump last years and only make us excited for what’s to come next year. So check it out and if you haven’t shopped yet for your young one, hopefully this list will get you excited to start pushing and shoving with other parents in your local retailer. 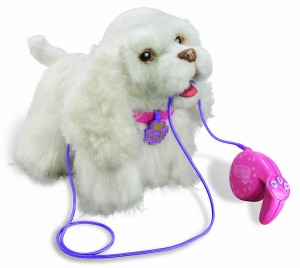 If you’ve got a budding animal lover in the house, My Walkin’ Pup is a great way to introduce your child to having a pet, without all the messes to clean up afterward. Your kid’s new pal is controlled by a few buttons on the handle of the leash. As you walk, the little plush puppy will wag his tail and bark. It’s an adorable way to fill that best friend niche until your young one is older and ready to take care of the real thing. The FurReal Friends Gogo My Walkin’ Pup is available on Amazon for $44.89. Everyone loves music in some form, and kids are certainly no different. There have been play-instruments on the market for years, but never anything that encouraged truly open-ended play. Paper Jamz uses Active Graphics Technology, allowing kids to create music simply by touching the circuit- embedded paper on the instrument. You can get guitars or drums, and control the rhythm for the included songs and, of course, improvise at will. Let your kids rock out with Paper Jamz; you can get the guitar for $19.99 and the drum set for $28.75 from Amazon. You can get your child the most adorable musical buddy on the market this holiday season with the Littlest Pet Shop Dancing Dog. The little pup dances along to your kid’s favorite tunes, which are played through the dog’s speakers when the cable is plugged into any portable music player. It’s a cute companion for kids, and they’ll be captivated for hours by the dancing, the flashing lights, and, of course, the music. You can get the party started for $14.99 from Amazon. Sneak in a little education along with a gift that your toddler will love this holiday season. They can join some of their favorite Disney Princesses; Tiana, Tinker Bell, and Rapunzel, on a host of fun adventures, learning some basic language and math skills in the process. Once your toddler has gotten through those games, there are over 40 others compatible with the Leapster Learning System that can be found on Leapster’s website. You can buy the Leapster Disney Fairy Tale Learning Gift Pack from the Leapster website for $79.99.

The newest Tony Hawk game, for the XBOX 360, PlayStation 3 and Wii, is perfect for the younger crowd, and perfect for parents who want their young gamers to get up and be active, too. Shred uses the same skateboard peripheral as Tony Hawk: Ride did, so your kids will be off the couch and moving around trying to imitate the legendary skateboarder himself. With bright, cell-shaded graphics and arcade-style gameplay, it’s sure to be a hit. You can get the game bundled with the board if you don’t have ride. It’s available on Amazon right now for as low as $80.00, but the Wii version is a little more pricy, no doubt thanks to higher demand. Singamajigs are leading the way for the hottest gift of the holiday season this year. You can just get one, but (naturally) they are far better when purchased two or four at a time. That’s because while one of these funky plush dolls can sing its own prerecorded song or chatter away in its own language, a group of them will chatter and laugh with each other all night, and, most impressively, sing the same song together in perfect harmony. These are going to be the pricy, hard-to-find gifts this year, though, so get going now if you want them. You can grab one for around $10 on Amazon, but be prepared to shell out more for deluxe packs that include several.

The name pretty much says it all; this is about as sure of a winning combination as you’ll find just about anywhere when it comes to gifts for the holiday season. Kids can build their favorite locations from the books (including Hogwarts and the Quidditch stadium), and recreate their own magical adventures once they’re done. They’ll be sure to bring smiles, and the smaller sets will make great stocking stuffers. Check out the link, which shows some of the most popular sets available right now on Amazon. Almost anyone who has ever been a parent knows a thing or two about those crayon stubs laying around the house, unused and forgotten. Well, those stubs need be waste no longer. Crayola’s crayon maker can melt old, used crayons and create new ones. You can even combine colors to create color-swirled crayons. Your child can watch the process as it happens, too, and the hatch remains locked while the melting is going on, so there are no safety concerns (besides the odd crayon stuffed too far up the nose, but that’s a separate issue). The Crayola Crayon Maker is for sale on Amazon now for $19.95. The Spy Video TRAKR might be the coolest remote control vehicle ever devised. This stealth camera on (silent, of course) treads comes with night vision, robotically enhanced vision and the ability to memorize and retrace different paths through the house. The camera part comes in with the front mounted camera, which transmits audio and video to a small LCD screen on the remote control itself, so the user can spy on proceedings elsewhere, from the safety of their own room. Pranksters can load audio onto the TRAKR, and have some fun at the expense of some confused and annoyed siblings. The possibilities are almost endless, though; the TRAKR can connect to any computer via USB and receive new programs and applications from the Spy Gear website. Get your future James Bond started on a career in espionage for $86.83 right now, off Amazon.