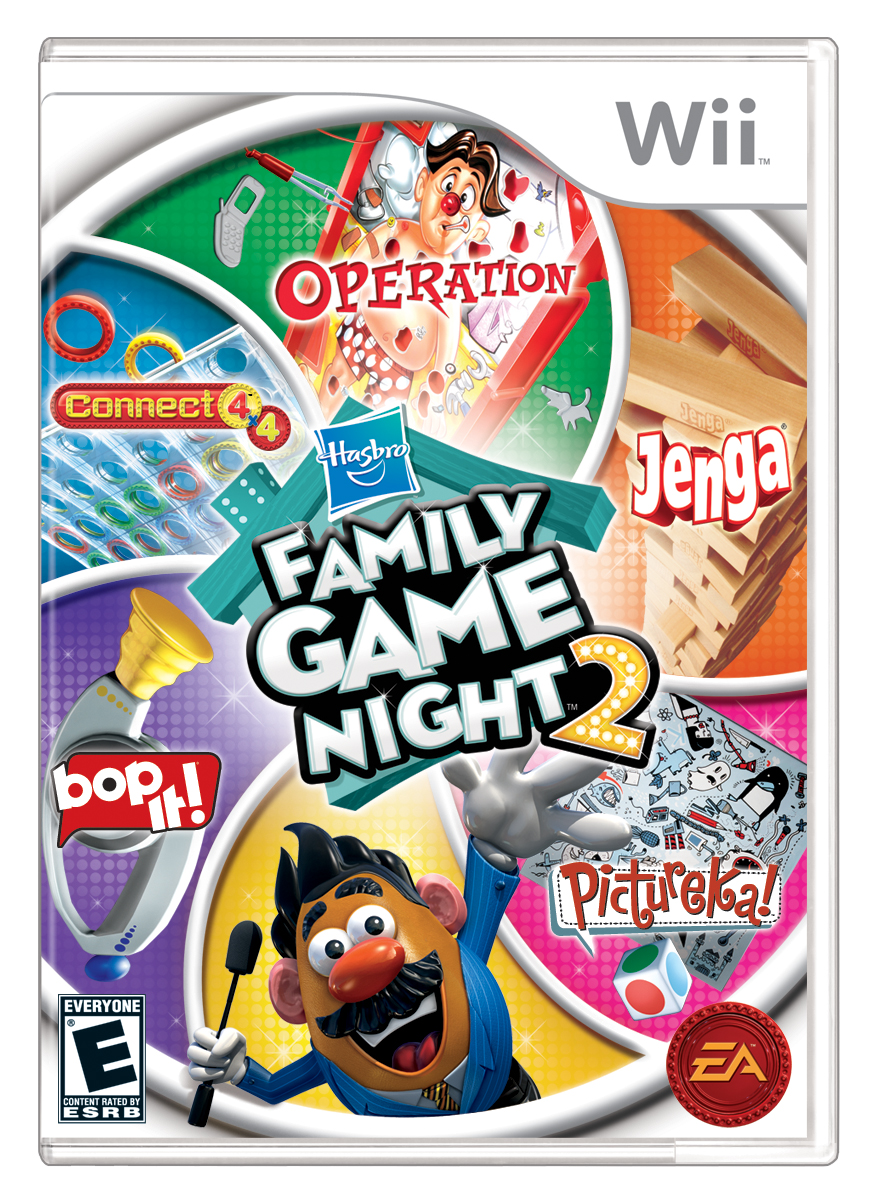 For some reason board games carry a bit of a stigma among the younger crowd. Try having a party, pull out a board game, and have a tween NOT roll their eyes at you. With this in mind the EA and Hasbro company has taken the classic board game experience to a new level with Wii Family Game Night 2. It’s actually pretty fun. Especially for kids.

Games included are Bop it, Operation, Pictureka, Jenga, and Connect 4. There is also the “Family Game Show” that lets the family compete with quick short versions of all of the games. For those of us that are familiar with the classic games, at first, playing it on a screen feels awkward and clunky. I felt a rant coming on. Seriously people, Jenga was just not meant to be played that way. It then dawned on me that the Wii Boom Blox is just a glorified Jenga, and we loved that game. So maybe it just takes a little adjustment to get use to the new way of playing. For many kids, their first experience with these games will be on the screen. They will think the old way is weird. Oh no, now I’m starting to feel old.

The home screen is centered in a family room with pieces strewn about the floor. There is one benefit to this game, you never lose the pieces and your toddler or niece/nephew won’t choke on them either. Your game host is the charming Mr/Mrs Potato head. As games are played, you earn decorations for your potato. It can be anything from a girly bouffant potato to a twilight vampire potato.  Select a game and it bounces off the wall on to a table in the room and then switched to a full screen for the game. [nggallery id=56]

You have a choice to play between the Classic version and the Remixed Version. It seems like the Remixes are more suited for the video game experience since they were designed with that in mind, while the classics were just converted. However, all of them have excellent graphics. Here is a look at the various games:

Bop It: Formerly a toy only busted out to revive parties at Lorelei Gilmore’s house. It makes me feel just as uncoordinated as the real one did. Each action that the host yells out has a correlated movement with it. The remixed version just adds more.

Operation: This one is pretty cool. I could see this being a child’s first experience that may move them to want to be a doctor. You enter the operating room and the X-Ray begins. You have tweezers that are for removing whatever specific item you are assigned. In the remixed version, once you remove item, you look in a CSI-like camera inside the body and pull and twist the object through outlines without touching the sides. After removing a cell phone it said “texting thumb cured.” Or after the frog “frog in throat removed.” At some point you can even shoot down germs too. Definitely a highlight of the game.

Pictureka: Like the old game, you just basically find what it tells you too. However the objects are small and crowded so you need a big screen or to be close to the TV. The drawings have a lot of personality and are fun.

Jenga: Pretty much identical in classic mode to the original. You have the ability to tap it first to see if the block you want is loose. Pulling out the block and putting it on top is not easy with the remote. Remixed mode only allows you to pull out different colors. Not my favorite one of the pack.

Connect 4: Although classic is available, the remixed version is more interesting. They have incorporated a double sided board concept into this. Rings in the front and and solid circles in the back. It is on a timer and point based so you can connect 4 more then once without ending the game. There are other floating points and actions that you can achieve as well. This one is also kind of hard to see at first because everything is so brightly colored.

All things considered, this game is a decent buy. I really could go either way. It’s not a must have. However, it would probably liven up your next family get together, for adults and children. The Family Game Show feature is fun when you get to switch between all the games and compete. It is a team activity, which is something you can’t buy with the originals. It is also cheaper to purchase this game for $29.99 then to buy all the other games separately, and it sure takes up less closet space.

The Bad: Classic mode is a little clunky and awkward. Instructions on how to play aren’t always very clear and takes some trial and error.