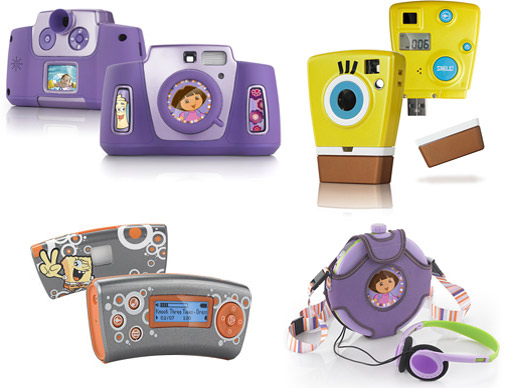 In September Nickelodeon and Imation joined forces to launch the new Npower electronics for kids. Npower is all about innovative consumer electronics and markets them to the tech savvy kid based on popular Nickelodeon stars such as SpongeBob SquarePants, Dora the Explorer, and the Naked Brothers Band. Npower has various SpongeBob SquarePants branded items such as Micro Digital cameras, 512MB Digital Music Players, and the Npower 1GB Fission which kids can shake to “the beat and blend sound overlays with your favorite tunes!” It will support up to 500 songs which is just enough for those who in this age category enjoy SpongeBob. For those who are an explorer like Dora can get her branded Digital Camera which is rugged for any little girl who wants to be a Tomb Raider and then for the pre-teens there is the Naked Brothers Npower fission Digital Players. One version will play music just like the SpongeBob player, the more expensive version has Java games and pre-loaded episodes for your pre-teen to enjoy on the go.
Prices range from $24.99 to $99.99 for Nickelodeon’s Npower electronics and be found at Amazon, Target, or Shop.nickjr.com